The NCSS, operated by UC Berkeley and USGS, added that approximately 12 to 40 small aftershocks are expected in the same seven-day period and may be felt locally.

As a rule of thumb, a magnitude 6.0 quake may have aftershocks up to 10 to 20 miles away, the NCSS added.

According to Dr. Robert Hartwig, president of the Insurance Information Institute (I.I.I.), this earthquake is the strongest to impact the area since the 1989 Loma Prieta quake which resulted in $1.8 billion in insured claims (in 2013 dollars) being paid to policyholders.

Initial reports suggest the greatest damage has been to historic buildings in the city of Napa, with the downtown area cordoned off to fully assess damage. There have also been reports of non-structural damage such as items falling off shelves, including wine bottles and barrels, and substantial sprinkler leakage to many buildings.

The Napa region is most known for its wine industry, but tourism draws visitors to the area year-round. 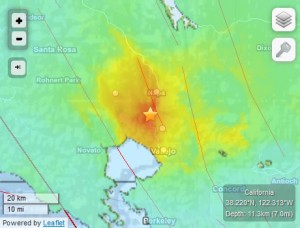 A report by catastrophe modelers CoreLogic EQECAT gave an initial estimate of $500 million to $1 billion in insured losses. Residential losses would account for about one half to one quarter of this loss estimate.

If the loss exceeds $1 billion it will be from uncertainty in commercial losses, CoreLogic EQECAT said, and losses to the wine industry could increase this estimate:

Business interruption (BI) losses are a major concern. As this is a very popular tourist area, many businesses — including wineries and restaurants — have sustained damage, both non-structural and structural.”

CoreLogic EQECAT noted that the Napa Valley wine harvest was already underway. Losses would have been less if this event had occurred pre-harvest.

According to the Napa Valley Vintners Association, while there have been reports of damage at some Napa Valley wineries and production and storage facilities, particularly those in the Napa and south Napa areas, vintners are still assessing their individual situations. More information is expected in the next 24 to 72 hours.

Standard homeowners, renters and business insurance policies do not cover damage from earthquakes. Coverage is available either in the form of an endorsement or as a separate policy.

I.I.I. earthquake facts and stats show California had the largest amount of earthquake premiums in 2013, at $1.6 billion, accounting for 61 percent of U.S. earthquake insurance premiums written.

This figure includes the state-run California Earthquake Authority, the largest provider of residential earthquake insurance in California. Only about 10 percent of California residents currently have earthquake coverage, down from about 30 percent in 1996, two years after the Northridge, California, earthquake.

The percentage of homeowners and renters who have earthquake insurance in the affected area is very low — in Napa less than 6 percent, and in Sonoma less than 10 percent, according to the California Earthquake Authority.

Check out key facts from the I.I.I.  on the insurance industry’s contribution to the California economy here.