The number of lightning deaths in the United States in 2015 continues to rise, the National Weather Service (NWS) has warned.

So far this year some 22 lightning fatalities have been recorded, just four shy of the 26 deaths recorded for the whole of 2014.

Lightning kills an average of 49 people in the U.S. each year, and hundreds more are severely injured, according to the NWS. 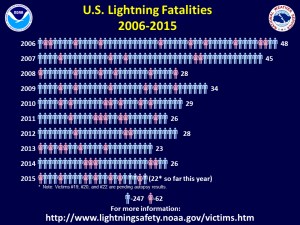 While storms can be deadly, the number of insurance claims from lighting strikes in the U.S. has been in a period of steady decline, according to the Insurance Information Institute (I.I.I.).

James Lynch, chief actuary at the I.I.I. noted that since 2010, the number of paid lightning claims is down more than 53 percent: