NOAA’s Spring Outlook calls for moderate to major flooding in northern North Dakota and in the Snake River basin in Idaho and flags California, which saw extensive flooding in February, as susceptible to additional flooding in the coming weeks.

Spring also marks the start of severe weather season for many states. Resources on severe weather preparedness are available at the Insurance Information Institute ( I.I.I.) website and weather.gov.

Which brings us to this: 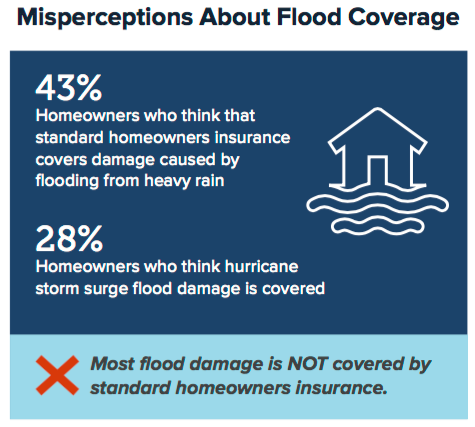 Many homeowners incorrectly believe that flooding is covered by standard homeowners insurance, according to the I.I.I. Consumer Insurance Survey.

How to change the misperception?

Part of the answer lies in education, as the I.I.I. says:

“Consumers can—and should—educate themselves about their coverage, recognize that they may have gaps in their coverage and seek guidance from an insurance professional when they purchase or renew a policy.”

The other part of the challenge, as outlined by Wharton professor Howard Kunreuther in an issue brief, lies in how to communicate to people that the best return on an insurance policy is no return at all.

“In reality, insurance is a protective measure should one suffer a loss. Homeowners should celebrate not having a loss because the financial consequences for an uninsured individual could be staggering.”

Odds favor above-average spring temperatures across much of the continental United States, including drought-stricken areas of Texas, the Southwest and the Great Plains, according to NOAAÃ¢â‚¬â„¢s Annual Spring Outlook.

NOAA says spring promises little drought relief for most of these areas, as well as Florida, with below- average spring precipitation favored there.

Right now 51 percent of the continental U.S.Ã¢â‚¬”primarily in the central and western regionsÃ¢â‚¬”is in moderate to exceptional drought.

NOAA says drought conditions are expected to persist, with new drought development, in California, the Southwest, the southern Rockies, Texas, and Florida.

Meanwhile, river flooding is likely to be worse than last year across the country, with the most significant flood potential in North Dakota.

After a year of reprieve, the Red River of the North between eastern North Dakota and northwest Minnesota, and the Souris River in North Dakota have the potential for moderate and major flooding, NOAA says.

The melting of late-season snow may also cause minor to moderate flooding in the upper Mississippi River basin, including southern Wisconsin, northern Illinois and northern Missouri.

Areas along the middle Mississippi, lower Missouri and Ohio River basins have already experienced minor flooding this year and the threat of minor flooding will continue through the spring, NOAA adds.

Flood damage is excluded under standard homeowners and renters insurance policies. Residential flood insurance is available in the form of a separate policy primarily from the National Flood Insurance Program (NFIP).