Earthquake resilience was  in the spotlight as the Obama administration gave its support for an earthquake-alert system on the West Coast at a White House summit Tuesday.

President Obama also signed an executive order establishing a federal earthquake risk management standard which will improve the capability of federal buildings to function after a quake.

The order requires federal agencies to ensure that federal buildings are constructed or altered using earthquake-resistant design provisions in the most current building codes.

A 2015 scientific assessment from the U.S. Geological Survey shows that more than 143 million Americans could experience potentially damaging earthquakes, nearly double the prior 2006 estimate.

The ShakeAlert early warning system being developed and tested in the West would warn  residents and businesses from at least a few seconds to a few minutes before the shaking starts.

This would be  enough time to slow and stop trains and taxiing planes, and to prevent cars from entering bridges and tunnels, for example.

A common misperception among Americans  is that earthquake coverage is provided in a homeowners or business insurance policy.

However, standard homeowners, renters and business insurance policies do not cover earthquake damage. Coverage is available either in the form of an endorsement or as a separate policy.

Some 85 percent of U.S. homeowners said they do not have coverage for earthquake damage in response to the Insurance Information Institute’s (I.I.I.) annual Pulse Survey.

The I.I.I. Pulse results showed significant variations in the number of consumers that have earthquake insurance across the U.S.

That number was greatest in the earthquake- prone West, where 18 percent of homeowners said they had purchased separate earthquake insurance coverage. 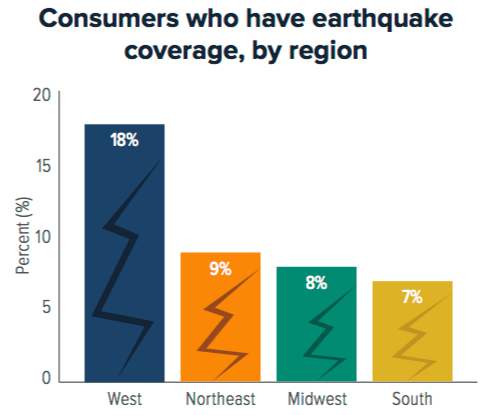 Information on reducing earthquake damage to homes and businesses is available on the Insurance Institute for Business and Home Safety (IBHS)  website.

The  I.I.I. also offers facts and statistics on earthquakes and tsunamis here.