It’s not important why, but the other day I needed to look up auto insurance written premiums for 1963.

My source: Insurance Facts 1964, an Insurance Information Institute publication that was forerunner to the  Insurance Fact Book, our one-stop property/casualty almanac whose 2015 edition went on sale this week. 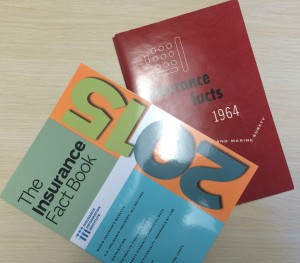 I.I.I. has been printing some version of the Fact Book for more than 50 years, and we have earned a reputation for scrupulous accuracy.

This excursion was where I saw how well-deserved that reputation is.

Auto written premiums were $6.839 billion in 1963, according to Insurance Facts. I wanted to verify the number. To do that, I was stumped for a minute — who else would have this bit of information?

First stop: the federal government. That’s the sort of minutiae that would fill up the Statistical Abstract of the United States, the Census Bureau’s collation of the nation’s vital signs. And it was there — but the government got the information from I.I.I. — that same Insurance Facts 1964. I shouldn’t have been surprised; we continue to provide information for the Statistical Abstract and similar works.

So I went back to where I.I.I. got the data all those years ago — A.M. Best’s Aggregates  & Averages, another statistical compendium with a peerage. (We get much of our data now from SNL Financial.)

In those days before the PC, Excel and Big Data, Aggregates  & Averages was much simpler. For the most part, it resembled a bound computer printout, with most information divided among three types of insurers: stock companies, mutuals and reciprocals. To calculate an industry total, you had to pick out numbers from each section.

That’s what I did, 50 years after the fact. Sure enough, all Best’s parts added to $6.839 billion, just like our old Insurance Facts said it would.

I was reassured, but I shouldn’t have been surprised. I got to see firsthand how much double-checking and questioning every line of the 242-page book received. Our editing is scrupulous, now, just as it was in 1964, when the first Mustang rolled onto the street and some band named the Beatles put out some records.