More than a week since devastating Typhoon Haiyan hit the Philippines and greater clarity is starting to emerge on the numbers surrounding this disaster.

A November 18 report from the United Nations Office for the Coordination of Humanitarian Affairs notes that Typhoon Haiyan affected an estimated 13 million people in nine regions.

The latest government figures estimate that over 4 million people have been displaced, of whom 392,470 are living in 1,587 evacuation centers in six regions, mainly in Western and Eastern Visayas regions.

An updated report from Guy Carpenter notes that according to Joint Typhoon Warning Center (JTWC) advisories, Typhoon Haiyan meets or surpasses the intensity of the strongest landfalling tropical cyclone in recorded history: Hurricane Camille (1969) which made landfall on the U.S. Gulf Coast as a devastating 190 mph (305 km/h) hurricane.

Catastrophe modeler AIR Worldwide reports that the islands of Leyte, Samar, and northern Cebu are among the worst affected areas. Tacloban City, the capital and biggest city (population of 220,000) of Leyte province was particularly hard hit as storm surges as high as 4 meters destroyed every coastal home and left many inland neighborhoods inundated with floodwaters.

As for the cost to insurers, AIR Worldwide estimates industry-wide insured losses of between $300 million and $700 million.

Due to low insurance take-up, this is a small proportion of the total damage to residential, commercial and agricultural property which AIR Worldwide estimates at between $6.5 billion and $14.5 billion. 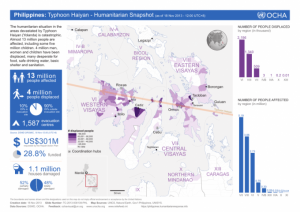