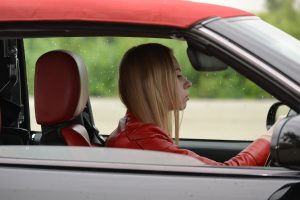 Teen drivers are a lot more likely to get into a car crash or near crash during the first three months after getting a driver’s license, compared to the previous three months with a learner’s permit.

A new study, led by the National Institutes of Health (NIH) found that teens were eight times more likely to have a crash or near crash during this period, and four times more likely to engage in risky behaviors, such as rapid acceleration, sudden braking and hard turns.

Teens with learner’s permits drove more safely, with their crash/near crash and risky driving rates akin to those of adults.

“During the learner’s permit period, parents are present, so there are some skills that teenagers cannot learn until they are on their own,” said Pnina Gershon, Ph.D., the study’s lead author. “We need a better understanding of how to help teenagers learn safe driving skills when parents or other adults are not present.”

The I.I.I. has a backgrounder on teen drivers here.

I think Jim’s post draws the wrong inference from the data. Specifically, the slide pairs the drop in the teenage unemployment rate with the rise in overall collision claim frequency. He infers that if teens are not unemployed, they’re employed and, presumably, driving to work.

But the drop in the unemployment rate of this age group isn’t solely—or even mainly—because they’ve taken jobs. To start with, in 2006-07, there were seven million people ages 16 to 19 in the labor force. That began falling in 2008, crossing six million in 2010 and plateauing at about 5.6 million midway through 2011. So in the space of less than five years, about 1.5 million people ages 16-19 disappeared from the labor force. 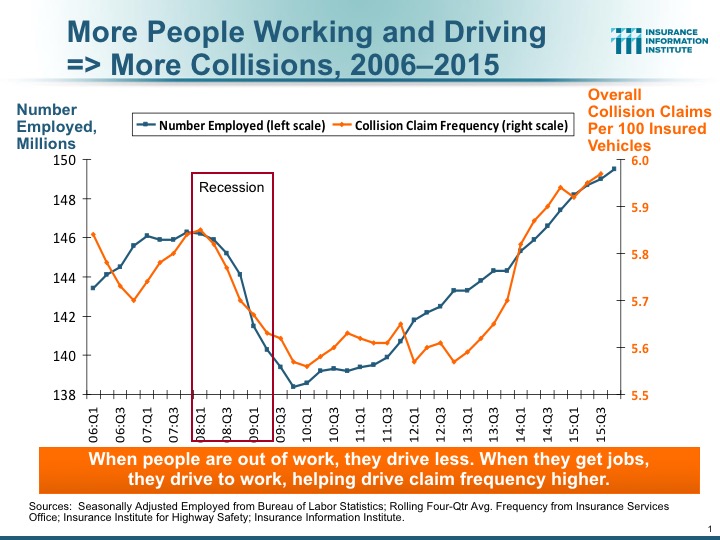 So I’d say that Jim has a good explanation for the spike in the number of claims; more people get jobs, start driving to and from work and unfortunately get into accidents more often.

But it wasn’t just teen workers. It was everybody.

It’s a gritty drive from Los Angeles to San Francisco as I learned with my wife and older daughter this summer — a climb through dry mountains, then across the nation’s Salad Bowl, the San Joaquin Valley, passing strings of tractor-trailers headed up the interstate toward Sacramento and cow country.

Like most tourists, we left the trailers behind by turning west on state Route 46. My wife drove. We passed a thicket of oil derricks and, frankly, not much else. The roads were well-designed and well-kept. Everyone drove fast. Far off we saw the hills that would lead us to Highway 101 and north again.

We came upon what, for that desolate place, was a major intersection — a flashing yellow light and a lane that let oncoming traffic turn left in front of us. A line of cars waited to make that left. Daylight was fading, and it was hard to pick out exactly how many wanted to turn or whether any had begun to.

Then we saw the sign: James Dean Memorial Junction.

Yeah. Right there, 60 years ago — September 30, 1955 — actor James Dean was cruising maybe 85 in his Porsche Spyder when Donald Turnupseed turned left. In moments Dean went from an astounding actor (East of Eden, Rebel Without a Cause, Giant) to a roadside tragedy.

He wasn’t a teen-ager, but he was a teen idol squeezed between the Sinatra and Elvis eras, and now his case is one I can’t help but think of as that older daughter baby-steps toward her first license this fall.

James Dean Memorial Junction still seems dodgy, but overall driving is much safer. The accident rate has fallen on average about 1 percent a year for decades. But long-term trends have statistical blips. We are in one now.

As we at the I.I.I. note in our Facts and Statistics on highway safety, traffic fatalities at mid-year are 14 percent higher than the same period last year, according to National Safety Council estimates. The economy has improved. People are driving more and perhaps less safely — faster, more texting.

The third week in October is National Teen Driver Safety Week, an event my daughter will be made well aware of, but this year we should all heed its message: Be careful behind the wheel.