Teenage drivers are on the roads in full force these days, whether reconnecting with friends after tough months of social isolation or commuting to summer jobs.

Summer has always been a dangerous time for young drivers. The period between Memorial Day and Labor Day has been dubbed the “100 Deadliest Days” due to the high proportion of fatal accidents involving teens.

Over 7,000 people died in teen driving-related summertime crashes from 2010 to 2019 in the United States, according to AAA Foundation for Traffic Safety. That’s more than seven people a day during these 100 Deadliest Days, compared to the rest of the year (six people a day).

Teens’ lack of driving experience and immaturity lead to dangerous practices behind the wheel, such as speeding, drinking, and tailgating. And when teen passengers are present in the vehicle, the risk of teen drivers getting into an accident goes up even more.

When a teen driver has only teen passengers in their vehicle, the fatality rate for all people involved in a crash increased 51 percent, according to AAA. But when older passengers (35 or older) ride with a teen driver, fatality rates in crashes decreased eight percent.

One trend having a positive impact on teen-caused accidents is that fewer of them are driving today than a generation ago. Only about 61 percent of 18-year-olds in the U.S. had a driver’s license in 2018, compared to 80.4 percent in 1983, according to an analysis by Green Car Congress.  The number of 16-year-old licensed drivers has also significantly decreased, from 46.2 percent in 1983 to 25.6 percent in 2018.

The reasons fewer teens are driving vary from the increased difficulty of obtaining a license to the ready availability of ride-sharing apps, to the higher cost of cars.

The increased difficulty can partly be attributed to the spread of graduated driver’s license (GDL) laws, which include a three-phase program that allows teen drivers to develop more mature driving attitudes and gain experience behind the wheel. These laws, passed by every state, have been successful in reducing teen motor vehicle accidents, according to the Insurance Institute for Highway Safety.

In spite of the success of graduated licensing programs and other positive trends, AAA strongly encourages parents and guardians to model safe driving behaviors and discuss dangerous behaviors with teens, as even one fatality is one too many, and unfortunately the 100 Deadliest Days is not ready to be retired. 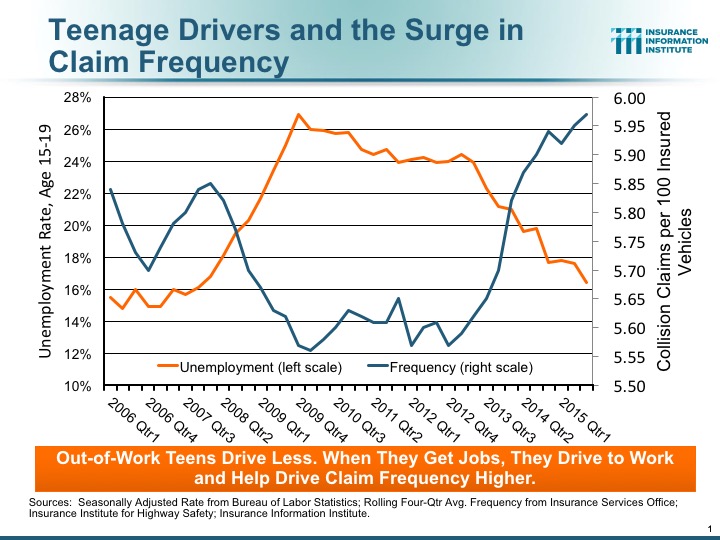 And in 2013, when teen unemployment falls, claim frequency takes off.

Here accident rates are measured as collision frequency — the number of collision claims per 100 vehicles over the previous 12 months, as measured by ISO. The seasonally adjusted unemployment rate is from the Bureau of Labor Statistics.

The correlation is so strong (R2 = 0.629, for you data geeks) that I’m tempted to hedge. The data seem to say that teen drivers are behind the current spike in auto rates. I think they are part of the reason, maybe even a big part.

Certainly teen drivers with jobs have to get to work, so they log more miles, and that will lead to more accidents in any group, but particularly teens, whose driving records are notoriously bad.

But many people in this age group can’t drive legally. It would take more research to see how much of the spike in claim frequency is driven by younger drivers.

I was inspired to put this together by an article in the Insurance Institute of Highway Safety’s (IIHS) Status Report, which showed how more teens are on the road.  Their point was to dispel the idea that teens had given up driving for good, that young people would rather text their friends than see them face to face. Instead, IIHS showed, teens were driving less because they didn’t have jobs. Once they got jobs, they started driving again.

At the Insurance Information Institute, we speak frequently about how driving trends affect insurance. We post our PowerPoint slide decks here. We also collect many facts and statistics on auto insurance here.