WeÃ¢â‚¬â„¢re visiting the United Kingdom this week, so itÃ¢â‚¬â„¢s appropriate we bring you a British themed news item.

An unpublished and original insurance claim for the loss of the Titanic will come under the hammer this Saturday at AldridgeÃ¢â‚¬â„¢s auction house in Devizes, Wiltshire. The document is expected to fetch more than Ã‚ £12,000 ($20,185). 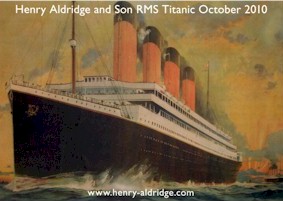 ItÃ¢â‚¬â„¢sÃ‚  more thanÃ‚  100 years since the RMS Titanic, a luxury British passenger liner, sank in the North Atlantic ocean on April 15, 1912 after colliding with an iceberg during her maiden voyage from Southampton, UK to New York City.

The 4-page insurance document up for sale was prepared for insurance purposes and written by second officer Charles Lightoller, the most senior officer to survive the Titanic disaster. It was certified and signed by the TitanicÃ¢â‚¬â„¢s second, third, fourth and fifth officers on April 19, 1912.

In what appears to be an attempt to avoid the insurers accusing the shipÃ¢â‚¬â„¢s crew of negligence, the certified claim includes an interesting and sometimes curious account of the disaster:

The ship sank in very deep water and proved a total loss, with cargo, luggage, personal effects and mails.Ã¢â‚¬ 

As to the actions on the bridge, the document states:

Ã¢â‚¬ ¦the first officer immediately starboarded the helm reversed the engines full and closed all watertight doors. The ship swung to port, but struck a Ã¢â‚¬Å“growlerÃ¢â‚¬  or small low-lying icebergÃ¢â‚¬ ¦Ã¢â‚¬ 

In the words of the auctioneers, itÃ¢â‚¬â„¢s fascinating that the officers would seem to attempt to minimize their encounter with the rather large and ominous iceberg by describing it as a Ã¢â‚¬Å“small low-lying iceberg.Ã¢â‚¬  This could possibly have been an attempt to downplay the size of the iceberg due to the question of liability and who was to blame for the sinking.

As the Western Daily Press reports, the strategy worked. Insurers paid out Ã‚ £3 million ($5.1 million) within 30 days Ã¢â‚¬“ crucially before a major inquiry revealed the catalogue of mishaps that led to the sinking.

The lot is one of 200 Titanic collectables included in the auction, which is to commemorate the 102nd anniversary of the loss of the ship.

Atlantic Mutual, then the largest marine and general insurance firm in North America, was one of the major insurers of Titanic, providing the Oceanic Steam Navigation Co, Ltd (TitanicÃ¢â‚¬â„¢s parent company) with what is believed to be more coverage for the ship than any of the many other single carriers which were part of TitanicÃ¢â‚¬â„¢s insurance consortium.

Numerous LloydÃ¢â‚¬â„¢s syndicates put their names on the insurance slip to cover the Titanic which was considered a prestigious risk to insure. More on how the disaster remains strongly linked to the history of the LloydÃ¢â‚¬â„¢s market here.

The insurance policy was sold in an October 2013 auction.

Check out I.I.I. facts and statistics on marine accidents.