On December 20, 2019, President Trump signed a federal funding package that includes a seven-year extension of the Terrorism Risk Insurance Act (TRIA). TRIA provides for a federal loss-sharing program for certain insured losses resulting from a certified act of terrorism.

Passage of the act was met with resounding approval by the insurance industry. You can read more about it here.

A critical mandate of the TRIA extension is for the Government Accountability Office (GAO) to make recommendations to Congress about how to amend the statute to address emerging cyberthreats. Triple-I recently hosted an exclusive members-only webinar featuring Jason Schupp of the Centers for Better Insurance, who discussed issues likely to be addressed by the GAO report.

Schupp said the report will likely serve as a starting point for a discussion about cyber threats and how the insurance industry can better meet the needs of businesses, nonprofits and local governments for cyber insurance. It will address:

Schupp proposes that the requirement be amended so the coverage doesn’t exclude insured losses specific to the loss of use, corruption or destruction of electronic data or the unauthorized disclosure of or access to nonpublic information.

But expanding the requirement carries considerable risk. If insurers are required to make more coverage available for cyber events than they are comfortable with the result could be a pullback in property and liability insurance generally – not just for cyber events. Any expansion must be balanced with the terms of the backstop.

Schupp concluded that the GAO’s investigation and report (which is required to be completed by June 2020) is likely to kick off a multi-year debate that could substantially redefine U.S. cyber insurance markets. Insurers, policyholders and other stakeholders should engage accordingly.

To learn about how to become a member of Triple-I visit iiimembership.org.

The House Financial Services Committee on October 31 approved an amended version of the Terrorism Risk Insurance Program Reauthorization Act of 2019 that would require the Government Accountability Office (GAO) to report on cyberterrorism risks and the Department of Treasury to issue a biennial report that includes “disaggregated data on places of worship.”

The Terrorism Risk Insurance Act of 2002 (TRIA), approved after the 9/11 terrorist attacks in New York City and Washington, D.C., provided a backstop to encourage insurers to resume writing terrorism policies. After 9/11, primary insurers sought to explicitly exclude terrorism coverage from their commercial policies, and reinsurers became unwilling to assume risks in urban areas perceived as vulnerable to attack.

TRIA created the Terrorism Risk Insurance Program (TRIP), a federal loss-sharing program for certain insured losses resulting from a certified act of terrorism. TRIP provides a backstop for insurers and has to be periodically reauthorized. It is currently due to expire at the end of 2020.

In addition to the reporting requirements mentioned above, the amended legislation shortens the extension period from 10 years.

The bill says the cyber report should analyze the general vulnerabilities and potential costs of cyberattacks on the nation’s infrastructure and reach conclusions about whether cyberrisk, particularly cyberliabilities, under property/casualty insurance, can be sufficiently covered and adequately priced.

The insurance industry has praised the progress of the extension as well as the proposed studies of cyber exposures. The next step toward TRIA reauthorization is a floor vote in the House of Representatives.

Follow the conversation about the federal terrorism backstop here.

Below is an abstract from the I.I.I. database citing a Wall Street Journal article from October 8, 2001. It describes the sharp increase in insurance rates immediately following the terrorist attacks of 9/11 2001.

The abstract is part of our series covering the Terrorism Risk Insurance Act of 2002 (TRIA). The act made public and private sharing of insured losses from acts of terrorism in the United States possible. 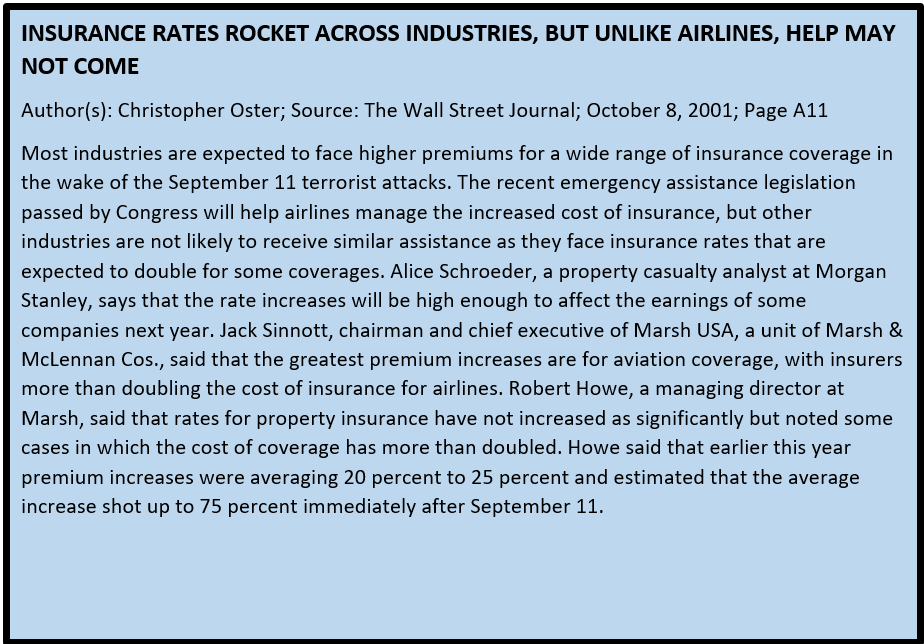 I.I.I.’s report, A World Without TRIA: Incalculable Risk, describes the function of the federal  terrorism backstop. 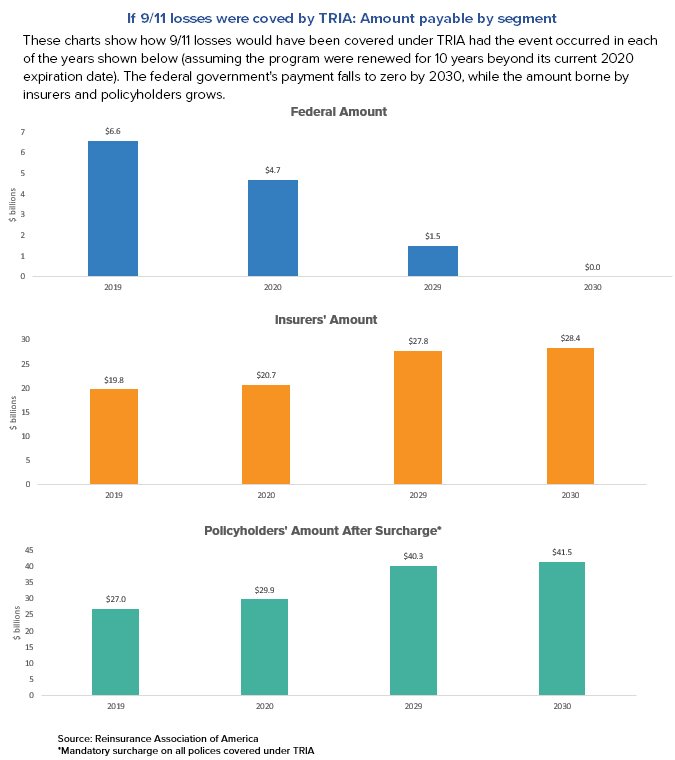 The April 2013 Boston bombing may have marked the first successful terrorist attack on U.S. soil since the September 11, 2001 tragedy, but terrorism on a global scale is increasing.

Yesterday’s attack by the Al-Shabaab terror group at a university in Kenya and a recent attack by gunmen targeting foreign tourists at the Bardo museum in Tunisia point to the persistent nature of the terrorist threat.

Groups connected with Al Qaeda and the Islamic State committed close to 200 attacks per year between 2007 and 2010, a number that grew by more than 200 percent, to about 600 attacks in 2013, according to the Global Terrorism Database at the University of Maryland.

Latest threats to U.S. targets include calls by Al-Shabaab for attacks on shopping malls.

And a recent intelligence assessment circulated by the Department of Homeland Security focused on the domestic terror threat from right-wing sovereign citizen extremists.

A new I.I.I. white paper, Terrorism Risk Insurance Program: Renewed and Restructured, takes us through each of more than eight distinct layers of taxpayer protection provided under TRIA’s renewed structure.

While TRIA from its inception was designed as a terrorism risk sharing mechanism between the public and private sector, an overwhelming share of the risk is borne by private insurers, a share which has increased steadily over time.

Today, all but the very largest (and least likely) terrorist attacks would be financed entirely within the private sector.

Enactment of the 2015 reauthorization legislation has brought clarity and stability to policyholders and the insurance marketplace once again, the I.I.I. notes.

This law does not stop terrorist attacks. But it does disrupt terrorists’ goals of damaging our economy.”

Since its creation in 2002, the federal Terrorism Risk Insurance Act, and its successors, have been critical components of America’s national economic security infrastructure. TRIA has cost taxpayers virtually nothing, yet the law continues to provide tangible benefits to the U.S. economy in the form of terrorism insurance market stability, affordability and availability.”

For a federally backed program, that is quite a success story.

More than a decade since 9/11, the Terrorism Risk Insurance Program continues to deliver Ã¢â‚¬Å“substantive direct benefits to millions of businesses, workers, consumers and the overall economy Ã¢â‚¬“ all at essentially no cost to taxpayers.Ã¢â‚¬ 

This was a key takeaway from testimony delivered yesterday by Dr. Robert Hartwig, I.I.I. president and chief economist, at a Senate Banking Committee hearing.

The war on terror is far from over, as the recent Boston Marathon bombings attest, but TRIA by all objective measures is now a proven and unqualified success.Ã¢â‚¬ 

Dr. Hartwig pointed out that upwards of 60 percent of businesses purchased terrorism coverage nationally in 2012, up from 27 percent in 2003.

Industries responsible for much of the countryÃ¢â‚¬â„¢s critical infrastructure such as power and utilities, telecommunications and healthcare, along with financial institutions and local government have take-up rates that approach or exceed 70 percent, Dr. Hartwig said.

Moreover, the take-up rate for workers compensation is effectively 100 percent, meaning that every worker in America is protected against injuries suffered as the result of a terrorist attack.

But it is important to note that the majority of coverage that exists in the market today exists because of the continued existence of the Terrorism Risk Insurance Program, Dr. Hartwig said.

He went on to warn of dire economic consequences if TRIA is not renewed:

A sharp spike in business failures, higher unemployment and reduced GDP growth are just a few of the adverse consequences that are certain to follow in the event of a major terrorist attack in the absence of TRIA.”

Dr. Hartwig noted that the unambiguous success of TRIA demonstrates that the Act has become an invaluable component of the country’s national security infrastructure, adding:

Failure to institutionalize a permanent plan to protect the nationÃ¢â‚¬â„¢s financial infrastructure leaves the country unnecessarily vulnerable to economic instability and risk of recession.Ã¢â‚¬ 