December 26 marks the 10th anniversary of the Indonesian earthquake and tsunami which killed more than a quarter of a million people in Indonesia, Thailand, Sri Lanka, India and other countries surrounding the Indian Ocean.

A decade later, it’s perhaps surprising to read that weaknesses remain in the tsunami warning system across the region.

Yet maybe the best protection for residents living in tsunami-vulnerable areas is to learn natural tsunami warning signals and which areas have the highest flood risk.

-Strong earthquake shaking, particularly shaking lasting longer than 30 seconds;
-Withdrawal of the sea to unusually low levels; and
-Loud roar from the ocean, similar to a jet airplane, explosion or sudden, intense rainfall.

Identifying evacuation routes — creating hazard and evacuation maps showing the quickest and safest routes to higher ground or other safe areas — is also a key recommendation. Allianz notes that it is critical to involve government and emergency responders when developing these maps.

Education and awareness among residents in tsunami-prone areas then, can play as important a role as instrument-based tsunami warning systems.

In addition to high mortality risk, earthquakes and tsunamis can cause significant insured property damages.

While insured losses from earthquakes and tsunamis amounted to just $45 million in 2013, this was far below the record $54 billion recorded in 2011, according to facts and statistics compiled by the I.I.I.

On March 11, 2011 a devastating tsunami hit the coast of northeast Japan, triggered by a powerful earthquake approximately 80 miles offshore. The quake and tsunami caused $35.7 billion in insured damages, according to Swiss Re.

The Japan and New Zealand quakes are among the 10 costliest world earthquakes and tsunamis, based on insured damages, according to Munich Re. 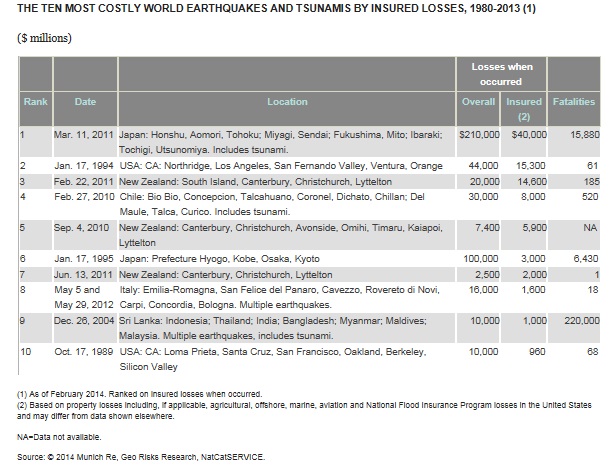 The magnitude 7.4 earthquake that hit Mexico yesterday may not have resulted in any tsunamis for the U.S., but this does not diminish the tsunami threat.

Major tsunamis are produced by large earthquakes (greater than magnitude 7 on the Richter scale) and those with shallow focus (<30km depth), according to NOAA.

Since 1850 tsunamis have been responsible for the loss of over 420,000 lives and billions of dollars of damage to coastal structures and habitats, NOAA says. Most of these casualties were caused by local tsunamis that occur about once per year somewhere in the world.

Next week is National Tsunami Preparedness Week, so now is a good time to remind ourselves of the risk and what to do if a tsunami happens.

By the way, catastrophe modeler EQECAT estimates that yesterdayÃ¢â‚¬â„¢s Mexico quake will result in insured losses of less than $100 million.

Check out this I.I.I. release for more information on earthquake insurance Mexico and a chart of the most costly world earthquake/tsunamis.