Natural catastrophes and man-made disasters cost insurers $34 billion in 2014, down 24 percent from $45 billion in 2013, according to just-released Swiss Re sigma preliminary estimates.

Of the $34 billion tab for insurers, some $29 billion was triggered by natural catastrophe events (compared with $37 billion in 2013), while man-made disasters generated the additional $5 billion in insured losses in 2014.

Despite total losses coming in at below annual averages, the United States still accounted for three of the most costly insured catastrophe losses for the year, with two thunderstorm events and one winter storm event causing just shy of $6 billion in insured losses (see chart below).

In mid-May, a spate of strong storms with large hail stones hit many parts of the U.S. over a five-day period resulting in insured losses of $2.9 billion — the highest of the year.

Extreme winter storms at the beginning of 2014 caused insured losses of $1.7 billion, above the average full-year winter storm loss number of $1.1 billion of the previous 10 years, sigma said.

Total economic losses from disaster events in 2014 reached $113 billion worldwide, according to sigma estimates, and around 11,000 people lost their lives in those events.

Ongoing events and revisions to estimates for previous ones may further change the 2014 loss outcomes, sigma noted, as this data includes updates to source data made by 28 November 2014 only.

More on global catastrophe losses from the I.I.I. here.

Winter storms caused $1.9 billion in insured losses in 2013, five times higher than the $38 million in damages seen in 2012, so it’s good to read via NOAA’s U.S. Winter Outlook that a repeat of last year’s winter of record cold and snow is unlikely.

Last year’s winter was exceptionally cold and snowy across most of the United States, east of the Rockies. A repeat of this extreme pattern is unlikely this year, although the Outlook does favor below-average temperatures in the south-central and southeastern states.”

While the South may experience a colder winter, the Outlook favors warmer-than-average temperatures in the western U.S., Alaska, Hawaii and New England, according to NOAA.

It’s important to note that for insurers, winter storms are historically very expensive and the third-largest cause of catastrophe losses, behind only hurricanes and tornadoes, according to the Insurance Information Institute (I.I.I.).

From 1994 to 2013, winter storms resulted in about $26.6 billion in insured losses, or $1.4 billion a year, on average, according to the Property Claim Services unit of ISO. 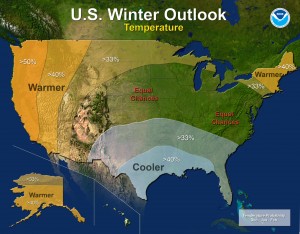 Meanwhile, NOAA’s Winter Outlook also suggests that California’s record-setting drought will persist or intensify in large parts of the state this winter.

Complete drought recovery in California this winter is highly unlikely. While we’re predicting at least a 2 in 3 chance that winter precipitation will be near or above normal throughout the state, with such widespread, extreme deficits, recovery will be slow.”

Tweet
TheÃ‚  arrival of theÃ‚  firstÃ‚  major winterÃ‚  storm of 2014 just two days into the new year makes this a good time to take stock of the insurance implications.
The Insurance Information Institute (I.I.I.)Ã‚  reportsÃ‚  that winter storms are historically very expensive and are the third-largest cause of catastrophe losses, behind only hurricanes and tornadoes.

From 1993 to 2012, winter storms resulted in about $27.8 billion in insured lossesÃ¢â‚¬”or $1.4 billion per year, on average, according to Property Claims Service for Verisk Insurance Solutions (see chart below).

Dr. Robert Hartwig, president of the I.I.I. and an economist, notes:

Winter storms accounted for 7.1 percent of all insured catastrophe losses between 1993 and 2012, placing it third behind hurricanes and tropical storms (40 percent) and tornadoes (36 percent) as the costliest natural disasters.Ã¢â‚¬ 

As this blizzardÃ‚  passes,Ã‚  commentators note thatÃ‚  arctic conditions are forecast to continue in its wake. Check outÃ‚  Eric Holthaus’ postÃ‚  at the Daily Beast for the latest.
Tweet

At least four separate winter storms affected the United States during February causing widespread damage, but insured losses resulting from these events were lower than expected, according to Aon Benfield.

The U.S. was particularly impacted by a series of powerful winter storms. Steve Jakubowski, president of Impact Forecasting, notes:

While the damage was widespread, economic losses across the affected U.S. states were within the expected range for events of this magnitude, and, in some cases, insured losses were actually lower than might have been expected.Ã¢â‚¬ 

The most deadly of the winter storms was a powerful Nor-easter which killed at least 15 people and affected more than 60 million citizens. A state of emergency was declared in six states.

The storm brought heavy snowfall of 40 inches in Connecticut, and coastal flooding in Massachusetts Ã¢â‚¬“ including the city of Boston. Total economic losses were estimated at roughly $100 million, with only a modest number of insurance claims filed.

The blast, which had an energy equivalent roughly 30 times stronger than an atomic bomb, damaged 100,000 homes, 3,000 buildings, 700 schools and 200 hospitals in more than six Russian cities and parts of two Kazakhstan provinces.

Economic losses were listed at RUB1 billion ($33 million), it adds.

A major winter storm, with blizzard conditions,Ã‚  is bearing down on the Northeast and New England, with between one and even up to three feet of snow expected in certain areas Friday night through Saturday.

Here in New Jersey the snow is already falling and blizzard warnings are in effect from here to southern Maine, including the New York City metro area and Long Island, Boston, Hartford, Providence, and Portland, Maine.

The National Weather Service warns that in addition to the snowfall amounts, wind gusts as high as 60-75 mph will have a significant impact on transportation and power. Coastal flooding is also possible from Boston northward.

As CNN reports, the storm is on a trajectory similar to that taken by superstorm Sandy.

The Insurance Information Institute (I.I.I.) notes that winter storms are the third-largest cause of catastrophe losses, behind only hurricanes and tornadoes.

For more facts and statistics, including the 15 costliest U.S. winters by insured losses click here.

Are you dreaming of a white Christmas? The chances of that happening are revealed in an updated map from NOAAÃ¢â‚¬â„¢s National Climatic Data Center (NCDC).

The map shows the climatological probabilities of a white Christmas across the United States.

Based on the most recent 1981-2010 Climate Normals, the Probability of a White Christmas map shows the climatological probability (in percent) that a snow depth of at least 1 inch will be observed on December 25.

Not surprisingly, the highest probabilities are in northern and mountainous areas of the country (see below): 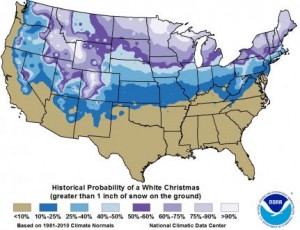 In the words of NCDC:

Time to check out I.I.I. tips on winter proofing your home.

See NCDCÃ¢â‚¬â„¢s U.S. Daily Snowfall map to keep track of the snowfall across the U.S. on a daily basis.

A NorÃ¢â‚¬â„¢easter storm brought heavy rains and snow to many parts of the Northeast yesterday.

The National Weather Service defines a norÃ¢â‚¬â„¢easter as a strong low pressure system that affects the Mid Atlantic and New England states and can form over land or over coastal waters.

NorÃ¢â‚¬â„¢easters are most commonly associated with winter storms, but can occur at any time of year.

Here are the Snowpril snow totals so far, courtesy of the Weather Channel.

Over at Wunderblog, Dr. Jeff Masters remarks that weÃ¢â‚¬â„¢ve now had two major NorÃ¢â‚¬â„¢easters this season: one in October and one in April:

Lake effect and mountain snow is impacting travel across the lower Great Lakes and center Appalachians. Further south, freeze warnings have been issued for all of Florida and along much of the Gulf coast. Temperatures will be at least 20 degrees below average, with brisk north winds making it feel even colder. The temperatures along much of the east coast are below average for this time of year.Ã¢â‚¬ 

The Insurance Information Institute (I.I.I.)Ã‚  reportsÃ‚  that winter storms are historically very expensive and are the third-largest cause of catastrophe losses, behind only hurricanes and tornadoes. From 1991 to 2010, winter storms resulted in about $26 billion in insured losses, according to ISO.

In the first six months of 2011, insured U.S. winter storm losses totaled $1.4 billion, according to Munich Re. That figure does not include losses arising in the second half of the year, for example from the October snowstorm which caused significant damage in the Northeast.

Full yearÃ‚  figures should be available in today’s 2011 Natural Catastrophe Year In Review Webinar, jointly presented by Munich Re and the I.I.I.

Insured U.S. winter storm losses in 2010 totaled $2.6 billion, the highest losses from this peril since 2003, as reported by Munich Re.

In its most recent annual winter outlook NOAA gave those of us living in the Northeast and Mid-Atlantic equal chances for above-, near-, or below- normal temperatures and precipitation.

Last yearÃ¢â‚¬â„¢s Groundhog Day blizzard (January 29-February 3, 2011) was among a record 12 weather disasters in 2011 that each caused $1 billion or more in damages, according to NOAA.

The city of Chicago was brought to a virtual standstill as up to 2 feet of snow fell in the area.

As a result of that blizzard the city is now taking a more hi-tech approach in its snow-response. The New York Times reports that a new city web site ChicagoShovels.org includes among other thingsÃ‚  a snowplow trackerÃ‚  that mapsÃ‚  ChicagoÃ¢â‚¬â„¢s approximately 300 snowplows making their way in real time through the city.

If like me one of the first news headlines you saw this morning was about the life-threatening storm of epic magnitude bearing down on Alaska, you probably wanted to know more, so hereÃ¢â‚¬â„¢s the low-down.

According to the National Weather Service, a major Bering Sea Storm is bearing down on Western Alaska with a mix of strong winds, high seas, blizzard conditions, major coastal flooding, and the potential to cause widespread damage.

This is expected to be one of the most severe Bering Sea storms on record, forecast to have sustained winds of 80 mph over an area the size of Colorado and produce storm surge effects on the Alaskan coast 8 to 10 feet above normal water levels. The Alaskan city of Nome is in its path.

A powerful and extremely dangerous storm of near record or record magnitude is bearing down on the west coast of Alaska. At 9 AM this morning the storm center was located about 600 miles southwest of St Lawrence Island. The storm is forecast to move rapidly northeast today and tonight with the center moving across the Chukotsk Peninsula tonight.Ã¢â‚¬ 

The Weather Matrix blog at Accuweather.com cites NWS saying that this storm is comparable to the November 11-12, 1974, Bering Sea storm that remains the most severe in Nome in 113 years of record keeping.

Major differences between the 1974 storm and this storm include the fact that tides were much greater in the 1974 storm. However, sea ice extent is currently much lower than it was in 1974, thus providing no protection along the coast and greater fetch, the NWS says.

Check out I.I.I. facts and stats on U.S. catastrophes.

As clean-up continues from last weekendÃ¢â‚¬â„¢s early snowstorm in the Northeast, insured losses already have exceeded $25 million, making this event a catastrophe.

PC360 reports that Verisk AnalyticsÃ¢â‚¬â„¢ Property Claims Service has declared the storm as a catastrophe with insured losses exceeding $25 million in six states: Pennsylvania, New York, New Jersey, Connecticut, Massachusetts, and New Hampshire. Other areas are to be determined.

PC360 notes that claims from winter storms typically come in slowly since damage is normally seen after snow and ice melts, and after the lights come back on.

Winter storms are historically very expensive and are the third-largest cause of catastrophe losses, behind only hurricanes and tornadoes. From 1991 to 2010, winter storms resulted in about $26 billion in insured losses, or more than $1 billion a year on average, according to ISO.

Insured U.S. winter storm losses in 2010 totaled $2.6 billion, the highest losses from this peril since 2003, according to a January 2011 analysis by Munich Re.