Despite progress made since the Zika and Ebola crises, most countries are not adequately prepared for a pandemic and are still investing too little to strengthen preparedness.

A report by the International Working Group on Financing Preparedness (IWG), established by the World Bank, finds that the investment case for financing pandemic preparedness is compelling.

“Failing to invest in preparedness is especially short-sighted given the low cost of preparedness relative to the devastating impact of a pandemic.”

In low- and middle-income countries that have calculated the cost of financing preparedness, the investment required is just $1 per person per year, the IWG says.

Meanwhile, a severe pandemic could result in millions of deaths and cost trillions of dollars, while even smaller outbreaks can cost thousands of lives and immense economic damage.

“The most conservative estimates suggest that pandemics destroy 0.1 to 1.0 percent of global GDP, on par with other global threats such as climate change. Recent economic work suggests that the annual global cost of moderately severe to severe pandemics is roughly $570 billion, or 0.7 percent of global income.” 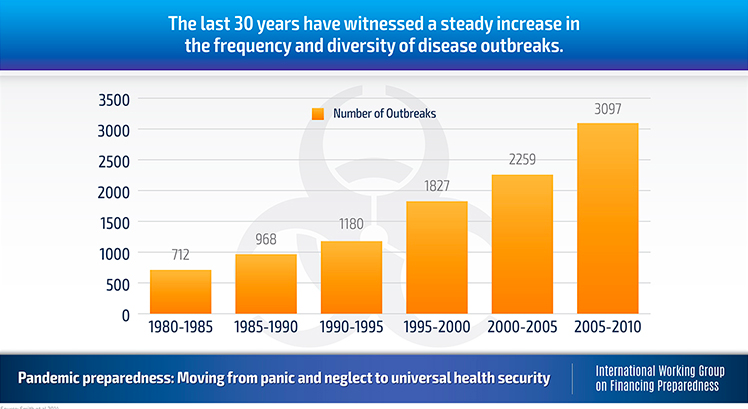 The report lays out 12 recommendations to ensure the adequate financing of the capabilities and infrastructure required to prevent, identify, contain, and respond to infectious disease outbreaks.

Many countries chronically underinvest in critical public health functions like disease surveillance, diagnostic laboratories, and emergency operations centers, which enable the early identification and containment of outbreaks, according to the IWG.

The human and economic costs of extreme natural disasters on poverty are much greater than previously thought and insurance is one of the resilience-building tools that could help, according to new analysis from the World Bank.

In all of the 117 countries studied, the report finds that the effect of floods, windstorms, earthquakes and tsunamis on well-being, measured in terms of lost consumption, is larger than asset losses.

It estimates the impact of disasters on well-being in these countries is equivalent to global annual consumption losses of $520 billion, and forces 26 million people into poverty each year. This outstrips other estimates by 60 percent.

The report finds that these measures combined would help countries and communities see a gain in well-being equivalent to a $100 billion increase in annual global consumption, and reduce the overall impact of disasters on well-being by 20 percent.

“Severe climate shocks threaten to roll back decades of progress against poverty. Storms, floods, and droughts have dire human and economic consequences, with poor people often paying the heaviest price. Building resilience to disasters not only makes economic sense, it is a moral imperative.”

For example, Kenya’s social protection system provided additional resources to vulnerable farmers well before the 2015 drought, helping them prepare for and mitigate its impacts.

And in Pakistan, after record-breaking floods in 2010, the government created a rapid-response cash grant program that supported recovery efforts of an estimated 8 million people.

Check out the Insurance Information Institute issues updates on microinsurance and emerging markets here, and on catastrophes and insurance issues here.

As we mark Earth Day and as nearly 170 countries gather in New York to sign the Paris climate treaty, a timely new partnership between the insurance industry, the United Nations and the World Bank is set to put vulnerable economies and societies on a path to a green, risk-informed and sustainable future.

With more than 90 percent of the economic costs of natural disasters in the developing world uninsured (the so-called protection gap), the IDF mission is to better understand and utilize risk measurement tools to enable governments to use their resources to target resilience and better protect people and their property.

“The IDF acts as a forum to enable the optimal coordination of insurance related activities; the development of shared priorities; the mobilization of collective resources; the development of strategic and operational relationships within and between governments, industry and international institutions; and, the avoidance of unhelpful and unnecessary fragmentation of efforts and resources. These collective actions can help close the protection gap.”

The IDF will be led by a high level steering group of senior leaders from the insurance industry as well as government institutions supported by an executive secretariat housed at the International Insurance Society (IIS).

“Insurers’ risk management skills help us assess natural disaster risk and can be exported to allow governments at all levels to reduce future losses by designing in resilience into infrastructure projects; and in increasing the use of insurance as a pre-disaster economic resource to allow people to protect their families, property and assets.”

“These skills can increase the utilization of insurance which will reduce the reliance on post-disaster aid and better target resources to the most important and needed humanitarian crises. Research has shown that a 1% increase in insurance penetration can reduce the disaster recovery burden on taxpayers by 22%.”

According to Swiss Re research, the global natural catastrophe property protection gap has risen steadily over the last 10 years, and 70% of the economic losses, or USD 1.3 trillion, were uninsured. In the emerging markets, 80 percent to 100 percent of the losses are uninsured.

As South Korean authorities step up efforts to stop the outbreak of Middle East Respiratory Syndrome, or MERS, from spreading further, the president of the World Bank Jim Yong Kim has warned that the next global pandemic could be far deadlier than any experienced in recent years.

The next pandemic could move much more rapidly than Ebola, Dr Kim noted:

It should come as no surprise that in a 2013 global survey, insurance industry executives said a global pandemic was their biggest worry, Dr Kim added.

The Financial Times blog The World  points to World Bank estimates that a pandemic could kill tens of millions and wipe out between 5 to 10 percent of GDP of the global economy,

Meanwhile, South Korea is experiencing an outbreak of MERS second in size only to that in Saudi Arabia, where it originated in 2012, with 10 dead and 122 confirmed cases so far. Some 3,000 people are reported to have been quarantined to-date.

Back to that 2013 insurance survey conducted by Towers Watson. Over 30,000 votes were cast and industry execs ranked global pandemic as their most important extreme risk in the long term.

I.I.I. has facts and statistics on mortality risk here.