A man drives a car into pedestrians on Westminster Bridge, keeps driving, crashes the car outside the Houses of Parliament, then tries to enter the complex armed with a knife. Four people are dead, including a policeman and the assailant, and at least 40 injured.

The investigation into yesterday’s terrorist attack in the heart of London is ongoing, as Westminster bridge reopens and Parliament gets back to work.

Small group and “lone wolf” terrorist attacks are seen as indicative of the shifting nature of terrorism, according to experts (here and here).

In the U.S. such attacks have yet to meet the $5 million damage certification threshold required to trigger the government-backed terrorism risk insurance program (the Terrorism Risk Insurance Program Reauthorization Act of 2015).

Broker Marsh reports that while recent attacks may have resulted in little direct physical damage and losses, they still have the potential for significant business disruption costs and contingency losses, for example if a city is put under curfew, or travelers cancel reservations, travel is disrupted, and business activity levels are diminished.

Policies can be structured to include nonphysical damage scenarios such as damage resulting from a cyber event, and nuclear, biological, chemical, and radiological (NBCR) risks.

Terrorism preparedness is evolving too as businesses adapt to the changing threat (see active shooter prevention and response steps).

The last major terrorist attack in the UK in July 2005 targeted the public transportation system during rush hour and left 52 people dead.

This chart, via the New York Times, shows that with the exception of the 9/11 and Oklahoma City attacks, there is no year since 1970 when terrorism killed more than 50 people in the United States: 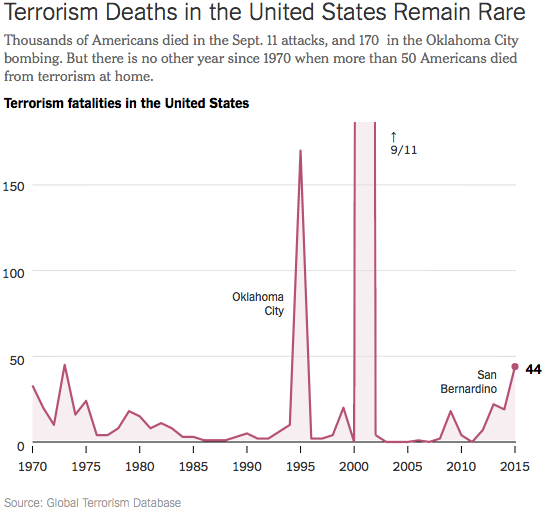