Severe thunderstorms accounted for the lion’s share of U.S. natural disaster losses in the first half of 2016, according to Munich Re.

Of the $17 billion in U.S. economic losses ($11 billion insured) caused by natural catastrophes in the first half of 2016, some $12.3 billion ($8.8 billion insured) were due to a series of storms in Texas and neighboring states, including destructive hailstorms in Dallas and San Antonio, and severe flooding in the Houston metro area.

Winter storms and cold waves were the next most costly U.S. peril in the first half causing insured losses of $1.5 billion, followed by flood and flash flood events with $1 billion in insured losses.

Wildfire, heatwaves and drought resulted in minor insured losses, and there were no losses due to earthquake or tropical cyclones in the first half, according to Munich Re’s Nat Cat Update. 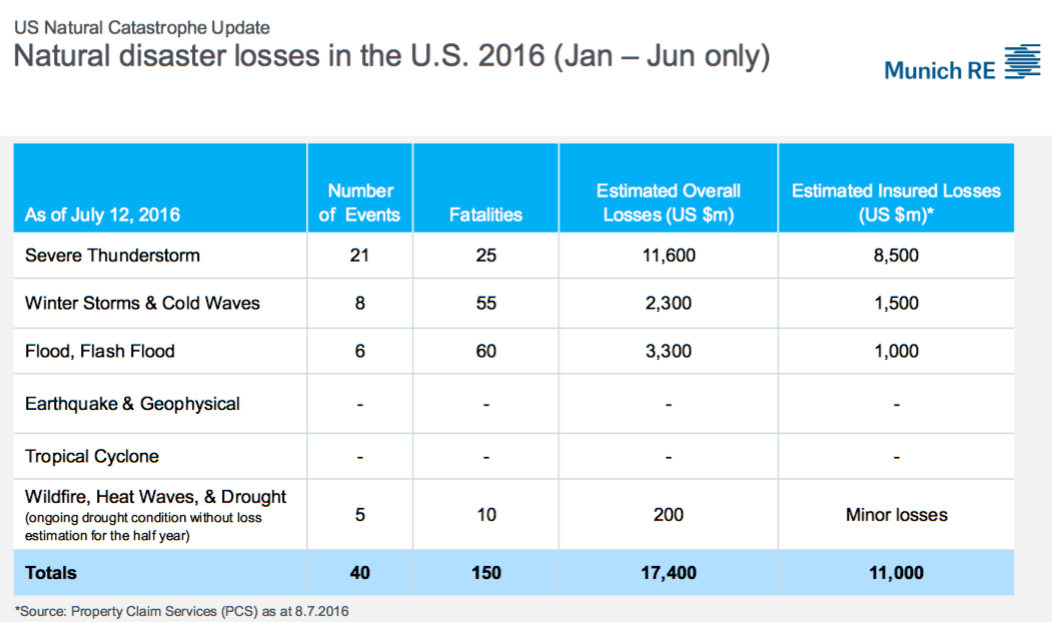 Weather extremes in Texas and other southern states are symptomatic of an El Niño phase, which intensifies the subtropical jet stream, which can cause an increase in severe storms in the region, Munich Re said.

The Fort McMurray fire has been declared the costliest natural catastrophe event in Canada’s history.

One beneficial aspect of El Niño conditions is that it tends to reduce springtime tornado activity over the southern Great Plains. While the year’s thunderstorm season got off to an early start, the states of Texas, Oklahoma, and Kansas have all seen about 50 percent fewer tornadoes this year than in the first half of 2015, Munich Re observed.

Nationally, the number of observed tornadoes was about 700 by the end of June, significantly below the average of 1,021 for the last 10 years.

Tony Kuczinski, president and CEO of Munich Re America, Inc, noted that homes and businesses incur the brunt of thunderstorm losses.

“Property damage from this spring’s thunderstorm season remind us that a roof is a building’s first line of defense against hail and wind events. Proper roof maintenance, roofing materials and installation are all critical to helping reduce these types of losses.”

To help homeowners build safer, stronger structures in the face of increasing severe weather events, Munich Re and the Insurance Institute for Business and Home Safety (IBHS) recently launchd an app that walks homeowners, contractors and architects through the home strengthening process.

FORTIFIED HomeTM On the Go can be downloaded free from the iTunes Store.

U.S. natural catastrophes accounted for almost one quarter of worldwide economic losses in the first half of 2016, and about 58 percent of global insured losses.