Pictures often speak louder than words and this is most certainly the case as we look at a recent history ofÃ‚  commercial lines insuranceÃ‚  price changes.

The chart, from Towers Watson’s most recent Commercial Lines Insurance Pricing Survey (CLIPS),Ã‚  compares the change in prices charged on policies underwritten in the most recent quarter to those charged for the same coverage during the same quarter the prior year. 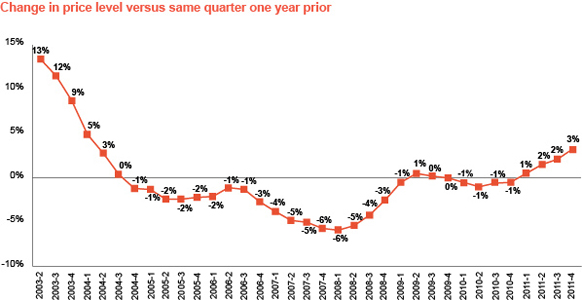 As we can see, Towers Watson’s survey shows that commercial insurance prices increased an aggregate 3% in the fourth quarter of 2011 Ã¢â‚¬“ the fourth consecutive quarter during which prices for allÃ‚  standard commercial lines rose.

By the way, the latest edition of Cavalcade of Risk, which features relevant and timely blog posts on a variety of risk management and insurance topics, is hosted by our friends over at Risk Management Monitor, and includes a link to our most recentÃ‚  post on MarketScout’s latest commercial pricing analysis.