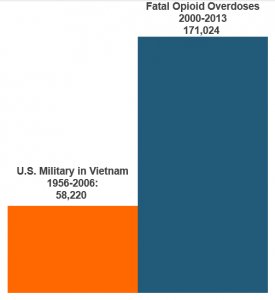 Opioids are legally prescribed drugs designed to safely mimic the painkilling effects of heroin and morphine. They have not proved as safe as had been hoped.

The drugs killed more than 170,000 over 14 years, about three times as many as this country lost in Vietnam. The Centers for Disease Control and Prevention (CDC) provides the data for opioids, and Vietnam statistics come from the Congressional Research Service (CRS) and National Archives.

I compare the epidemic to warfare because I became aware of the issue at a 2014 Workers Compensation Research Institute (WCRI) conference, when a Boston poll noted (if memory serves) that for every Massachusetts fatality in Iraq or Afghanistan, there were eight opioid victims. It’s also valuable, I think, to compare the War on Drugs with the more traditional battlefront.

Sometimes opioids like OxyContin, Vicodin and Percocet are referred to with the general term narcotics, as I did in an article for Contingencies magazine that traced the epidemic’s impact on workers compensation insurance:

Chances are good that if you’ve made a workers comp claim, you’ve had opioids in [your] medicine cabinet. Narcotics made up 25 percent of workers comp drug costs, according to the National Council on Compensation Insurance (NCCI), and more than 45 percent of narcotics costs pay for drugs containing oxycodone.”

By contrast, 16,899 died in Vietnam in 1968, the most violent year of the war. So the opioid epidemic has leveled off to deliver tragedy as frequently as the worst year of the Vietnam War.

On another front the news is not good. Opioid addicts often turn to heroin when their prescriptions run out, and the number of heroin-related deaths rose 39 percent last year, to 8,257, the CDC reports. That’s in addition to the opioid toll.