Asked for the secret to his success, famed Berkshire Hathaway CEO Warren Buffett often points to insurance float, “money that doesn’t belong to us but that we can invest for Berkshire’s benefit.”

He is talking about premium and loss reserves, the funds that any insurer holds while waiting for claims to settle. That money gets invested, and the investment income is an important revenue source for insurers. It also lowers insurance premiums, since actuaries take investment income into account when setting prices.

But these days float isn’t so buoyant, as you can see from the accompanying chart, which shows the net new money yield — what insurers typically obtain when they invest the float, adjusted for inflation. The National Council on Compensation Insurance (NCCI) estimates the yield, and we at  I.I.I. made the inflation adjustment. 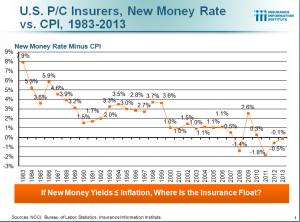 The chart goes back decades, and it is easy to see the steady decline in yields. Thirty years ago the float yielded 5 percentage points above the inflation rate.

Insurers differ in their investment strategy, but taken as a whole, the industry has suffered from the loss in yield. As a result, insurers have had to deliver better underwriting results in order to be as profitable as they were 10, 20 or 30 years ago.

Last year the property/casualty industry wrote a combined ratio of 97, and delivered an 8.2 percent return on equity.   The industry had a similar ROE in 1983 — 8.3 percent – but ran a combined ratio of 112, thanks in no small part to the tailwind provided by investment yields nearly 8 percentage points above inflation.

Put another way, rates have to be about 15 percent higher today to achieve the same return as a generation ago, and that’s before considering inflation or any other changes in the marketplace.