Sweltering temperaturesÃ‚  across much of the eastern part of the United States over the holiday weekend got us thinking about another catastrophic risk: wildfires.

The map below from the U.S. Forest Service Wildland Fire Assessment System indicates that the fire danger is currently high to extremely high in the southwestern U.S.

Wildfires destroyed a total of 12 homes in parts of Amarillo in the Texas Panhandle over the weekend. Meanwhile in Florida state officials say the danger of wildfire is very high throughout the state, due to lack of rain, low humidity and windy conditions.

During the first four months of 2011 there were over 22,000 wildfires in the U.S., affecting 46 states, and burning more than 2 million acres, according toÃ‚  I.I.I. facts and statistics on wildfires.

In 2010 catastrophic wildfires caused $210 million in insured losses and $314 million in total economic losses, according to Munich Re.

Although eight of the 10 costliest U.S. wildfires in history, based on insured losses, occurred in California, Texas has had the greatest number of wildfires in the last three years. However, wildfires are a national problem affecting almost every state.

Check out theÃ‚  National Interagency Fire Center for the latest fire outlook for May through August. 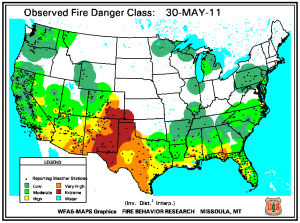