Two wildfires in California prompted officials to issue air pollution warnings almost 200 miles away in Nevada this week, reminding us that wildfire exposure reaches far beyond the flames.

In the first six months of 2016 there were 26,510 wildfires across the United States, compared to 29,078 wildfires in the first half of 2015, according to statistics from the National Interagency Fire Center, as reported by the Insurance Information Institute (I.I.I.).

Over the 20-year period 1995 to 2014, fires—including wildfires—accounted for 1.5 percent of insured catastrophe losses in the United States, totaling about $6 billion, according to the Property Claims Services (PCS) unit of ISO.

Smoke, soot and ash produced by large wildfires present a risk to property and life in the fire zone, not to mention a potential health risk to residents living in the path of the smoke.

It’s important to recognize that even if a property doesn’t suffer direct damage from flames in a wildfire, it may be exposed to extensive smoke, soot and ash damage.

From the insurance perspective, damage caused by fire and smoke are covered under standard homeowners, renters and business owners policies and under the comprehensive portion of an auto insurance policy.

However, it’s important to notify your agent or insurer of this damage on a timely and proper basis.

Water losses or other damage caused by fire fighters while extinguishing a fire is also covered under these policies.

Here’s a visual of the smoke from the California wildfires, courtesy of NOAA and Weather Underground: 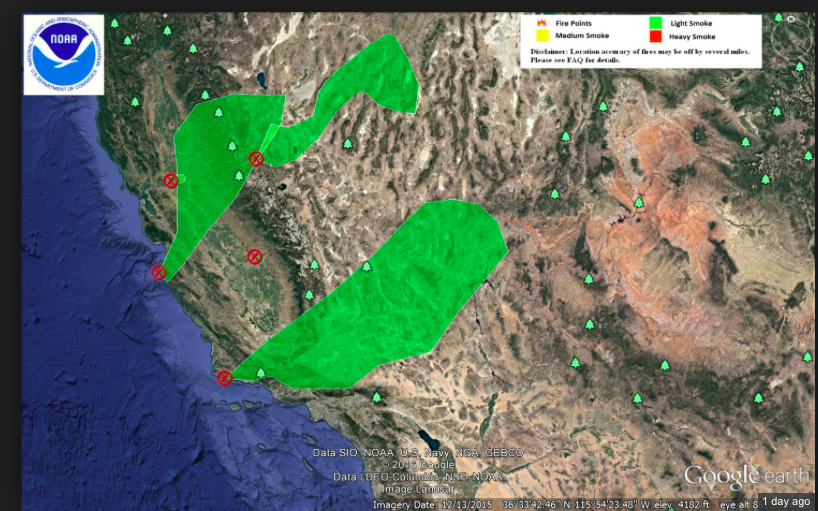