Private workers compensation insurers were slightly less profitable in 2019 than their 2018 record, according to a preliminary analysis by the National Council of Compensation Insurance (NCCI). NCCI estimates the combined ratio – a measure of insurer profitability – for 2019 will be about 87 percent, the second-lowest in recent history after last year’s record-low 83.2 percent. 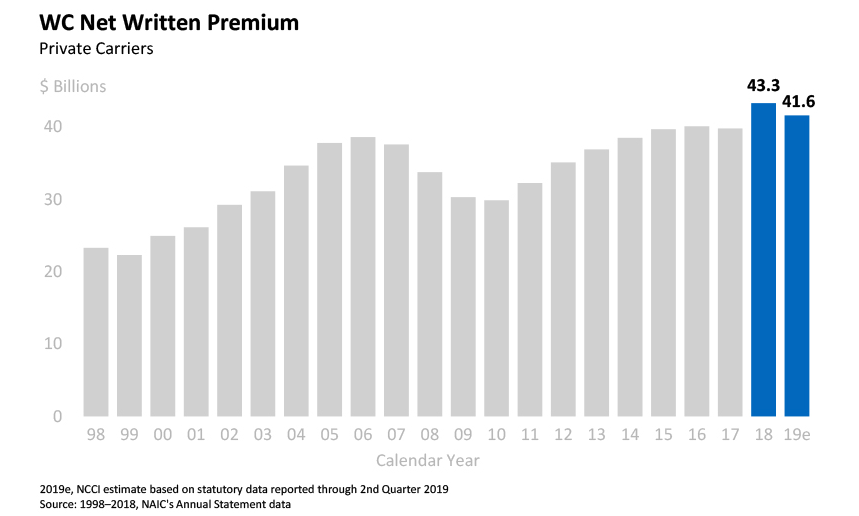 Workers’ compensation net premiums written (NPW) fell 3.9 percent in 2019, to $41.6 billion from $43.3 billion in 2018, the report says. Before 2018, cession of premiums to offshore reinsurers stalled NPW growth.  But the Base Erosion Anti-Abuse Tax (BEAT) component of the Tax Cuts and Jobs Act of 2017 – which limits multinational corporations’ ability to shift profits from the United States by making tax-deductible payments to affiliates in low-tax countries – spurred NPW growth to almost 9 percent in 2018.

While the BEAT’s residual effect and the strong economy may place upward pressure on 2019 net premiums written, recent decreases in rates and loss costs are likely to more than offset these factors.

Changes in rates/loss costs impact premium growth and reflect several factors that impact system costs, such as changes in the economy, cost containment initiatives, and reforms. NCCI expects premium in 2019 to fall 10 percent, on average, as a result of rate/loss cost filings made in jurisdictions for which NCCI provides ratemaking services.

The State of the Line Report was presented at NCCI’s Annual Issues Symposium (AIS) in May.